Psychobiotics, A Tale of Two Brains 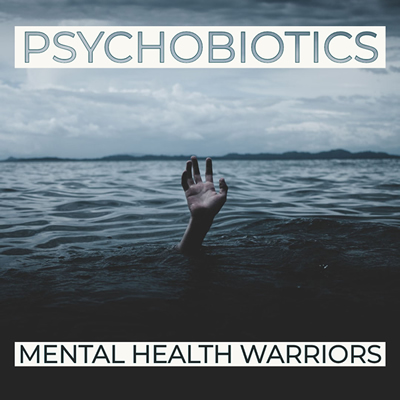 I was at a nearby health food store a national chain, and out of curiosity I asked the gentleman restocking the shelves which one was there best seller, he laughed and pointed to the one dead center of the wall. I wondered what was so special about this particular blend was it more potent or did it have a specific species of probiotics that made it so popular. His response was simply "Location." I asked to clarify, and he said whatever probiotic they had the most of in stock, the put it in the center of the selections because people didn't want the cheapest and didn't want the most expensive and the was at hands reach.

I wondered how often we settle for what we believe is best for us, and it is only a marketing effort to get us to buy what we may not need. I want to share with you the importance of probiotics in ways you may not have considered and give you a deeper understanding of their significance in your life.

Two brains run your body.. The First Brain gives you conscious control of both ends of the GI tract from Mouth and Anus. The Second Brain Controls Everything Else without interference from the first Brain. Becoming ever so common is digestive Issues like IBS and IBD, and these areas are linked to increased Anxiety and Depression. Unfortunately, this is often overlooked in the Mental Health Clinics today who are focused on other are of chemistry and emotions, not that these are not important. But a puzzle is never finished unless you have found all the pieces, especially the ones on the floor. Often seen supporting GI issues resolving the Mental Issues as well.

From Joy to Depression, you Biome has a controlling effect and regulation on your mood. Marie Francois Xavier Bichat (18th century) discovered the intestines had its nervous system in the Gut. He described it as a tube Sock that surrounds the Gut, unlike the Brain that sat in a single clump. He designated this the "Epi-gastric Center." Michael Gershon, in the 20th century, renamed it "the Second Brain."

So, let me introduce you to Your Microbiome, also known as the Microbiota. Your Microbiome is a city that never sleeps, and a community of organisms populates it. Like every community, it has its problems. This population of Bacteria, Yeast, Protozoan, and viruses Is foundationally responsible for much of your health and happiness. We need a healthy balance and population of these citizens of your Gut. When it is all aligned and balanced life is a more joyous experience with better digestion and less stress.

However, when harmful elements gain access to your GI tract through many types of exposures and lack of immune response to handle the invasion. These types of foreign intruders can lead to many problems. If we cannot keep our Good protective components working at high levels, then these corrupt entities will move in and set up shop, and there goes the neighborhood.

Your attitude and emotions are biotic dependents. You have what is known as commensals, a domesticated form of probiotics; these are your Guard dogs protecting us from the Pathogenic bacteria similar to wild wolves attacking us. The probiotics that keep us on an even plane are known as Psychobiotics. These can communicate with both brains in the body using a variety of chemical messengers such as Neurotransmitters, Hormones, Fatty Acids, Metabolites, and Cytokines.

Communication with your Gut is a two-way street. Cognitive Behavioral Therapy, which helps us change how we think, can reduce IBS, which is a positive result. We know that stress can negatively impact your Gut, creating digestive issues, giving you a negative outcome. Your Microbiota communicates with both Brains thought the Vagus Nerve primarily. We see these messages in the form of cravings. These cravings can be info from the Gut for the types of Fats, Carbs, and Proteins it needs to perform its functions.

Many Bacteria are like thugs extorting you for protection from themselves, a typical protection racket. Enterohemorrhagic E. Coli will not bother you as long as you make your protection payments in the form of sugar. If you don't pay, it will start busting things up and tears up your gut lining leading to bloody diarrhea. You can win against these guys you have to starve them out and consciously choose not to indulge in the sugar cravings and flood the area with the right probiotics, and this may take weeks to rebalance the Biome.

A network through which the gut microbiome communicates in three primary ways: Neural, Immune, Endocrine. Through this pathway, the Brain can influence the Motility, Secretion, nutrient delivery, and microbial balance. The Gut can affect the Brain through neurotransmitters, stress and anxiety, mood, and behavior.

Cytokines are small protein messengers released by Immune Cells and Cells in the GI tract to stimulate an immune response. Pathogenic Bacteria can release cytokines as well and stimulate increased inflammation in the Gut. However, Psychobiotics can reduce this response by healing the gut lining directly or indirectly. Acetyl Choline can slow the immune response by the overactive immune system. Acetyl Choline can also be produced by Vagus when stimulated and with upregulated cortisol due to stress and reduce the immune system response. Cytokines can induce depression when given to an individual with an injection or when released by an immune cell can have a powerful effect.

HPA Axis- Hypothalamus is a cross between Brain & gland, a vital part of the Limbic System with specialized nerve ending that sample the blood for markers. If a marker or tag of a harmful bacteria, it will start a cascade of events in motion. First, the Pituitary, which is having a continual dialog with the Thyroid, is interrupted with an Emergency Response. Secondly, when the Emergency Response System is activated, it will trigger an adrenal response to release cortisol and other hormones. People with depression and anxiety can have a dysfunctional HPA Axis and experience heightened anxiety and stress.

Chronic inflammation leads to indefinite production of stress hormones which can lead to many mental issues:

Gastroenteritis (inflammation of the Gut) experienced by 180 million Americans dealing with post-infectious bacterial dysbiosis. Your healthy Gut Biome is your first defense against these foreign pathogens.

World health organization Predicts that Depression and Anxiety will become the number 1 disability for decades to come. The rates continue to increase in the face of escalating psych meds being prescribed and distributed. Indicating that there is still not a good handle by the medical profession or pharmaceutical companies on how to deal with this monumental issue.

Depression is similar to Sickness behavior; remember the effect the cytokines had on the body with an immune response. When Your depressed or sick, you will want to stay home and in Bed. You'll skip out on social interactions and avoid seeing people. These are survival Mechanisms. You need to stay away from dangerous situations when your weak, rest to conserve energies for immune response, and avoid spreading the infection to our community

Psychobiotics, a term coined by :

A study was done to determine whether or not probiotics had any effect on an induvial when stressed. They performed a drowning test on two groups of mice, one fed food with Lactobacillus Rhamnosus, a Serotonin Neurotransmitter producer and a set group without it. The first test was with the control group; they would put them in a bucket of water and wait to see what happened. After about 15 minutes, the mice would start to panic and drown they scooped them out, and drew their blood, and cortisol was measured, and it was very high. With the test group taking Rhamnosus took the same test, they swam for an hour with no panic shown, they scooped them out, and their blood work showed normal levels of cortisol.

Think about how much of our stress is due to a lack of Rhamnosus in our diet. They postulated that the only way for these Psychobiotics to reach the Brain would have to be through the Vagus nerve. So, they cut the vagus nerve in the mice taking Rhamnosus and retested them. The exhibited the same response as the control group showing that the beneficial rhamnosus couldn't have a positive effect on the Brain without the Neural communication. This discovery is what led them to coin the term Psychobiotics.

Psychobiotics previously defined as live bacteria (probiotics), which, when ingested, confer mental health benefits through interactions with commensal gut bacteria. This definition has expanded to encompass prebiotics, which enhances the growth of beneficial gut bacteria. Probiotics and prebiotics affect the emotional, cognitive, systemic, and neural variables relevant to health and disease.

In 1909 Dr. Hubert had a psychiatric patient drinking soured milk, and he experienced changes in his constipation, weight increased, started reading, conversing, and paying attention to his surroundings. By 1910 "The treatment of Melancholia by the Lactic Acid Bacillus" was published in the British Journal of Psychiatry. He used a fermented milk kefir product made at the university hospital where he worked. The results were a gradual reduction of depression, gained energy, and increased mobility in their joints reducing rigidity. Dr. Huber experienced a 2/3rds success rate. He claimed this attributed to L. Bacillus treatment

By 1917 over 30 Probiotics on the Market and in 1923 Acidophilus milk is being touted for its treatment of Psychosis. The advances and pioneering efforts in psychiatry were brought to a sudden stop with the onset of Freudian theory and talk therapy. While talk therapy has revealed that there is two-way communication with the Brain and Gut. Many cases where the mental issues had attributed to an abusive parent could be more likely an abusive gut microbiome causing the problems.

Talk therapy gave way to chemistry in 1951 the first antidepressant was discovered accidentally with a tuberculosis drug called Iproniazid. Observations documented that patients “became quite happy and rambunctious." not quite sure what was meant by rambunctious, But I can imagine the scene it created.

With the success of Iproniazid, this led to an increase in Pharmaceutical interest in neurotransmitter drugs to increase Serotonin. Hence the rapid introduction of Prozac, Paxil, and Zoloft. With new classes such as MAOI's and TCA's working on Serotonin and Norepinephrine production and receptors. A theory that science can solve any brain dysfunction by adjusting the Neurotransmitters became a very seductive model. Interestingly enough, the original Antidepressant (Iproniazid) was fighting bacteria, and the lack of cytokines released from an immune response lifted moods as well.

Psychobiotics that have shown to be effective against today's major diseases, such as:

Feeding the Masses of the Microbiome

Fecal Microbiota Transplant is a lifesaving intervention, according to the British Journal of Medicine for the benefit of:

Now that you understand how the Microbiota affects you. You will want to Know the Psychological Profile of any fecal donors before you let their Crap into your life.

After spending many years working with chronically ill patients from around the world, I find that establishing a healthy Microbiota is foundational to seeing their success. I use single batches of psychobiotics in my clinic that we can custom blend in the right ration and dose it according to what your body needs to give you the health and happiness you deserve.